Urban agriculture is becoming popular in cities around the world. It offers several benefits: food security, easy access that reduces costs, which means that you get the freshest products. Add to that the environmental benefits. Urban farms increase the vegetation of a city, acting as drainage basins and reducing harmful runoff, increasing shade, and also acting as a buffer against climate change, as they reduce the impact of heat.

Pakistan is blessed with a variety of climatic and geographical regimes, which create diverse agro-ecological conditions, suitable for growing almost all types of vegetables. The planted area full of Pakistan is about 22.94 million hectares. Of these, vegetables and condiments are grown on 0.35 and 0.18 million hectares, respectively, which represents approximately 2.30% of the total cultivated area. Punjab contributes with its participation in the planted area with 52%, Sindh with 26.15%, KPK with 10.85%, and Baluchistan with 11% of the total area cultivated with vegetables.

Pakistan has the sixth-largest population in the world; the estimate for 2018 is more than 200 million inhabitants, and for the next decade the population is expected to exceed 220 million. This will lead to increased demand for food and agricultural products. Likewise, 24 percent of the country’s population is malnourished and the number has been increasing rapidly in recent years, this situation requires an increase in productivity per unit area with good quality.

Urban agriculture has great potential to deal with the food and health of the urban population and the prohibition of the peri-urban population. Pakistan can also start to produce vegetables for export to international markets, especially the Middle East. Urban agriculture is largely immune to the restrictions of climatic conditions, which force most Pakistani farmers to avoid growing certain crops year-round and increase the country’s import accounts.

Urban agriculture helps to eliminate any problems related to the climate, such as strong winds, rains, or floods because the crops will be grown in a closed and controlled environment. In addition, plantations can be protected from insects and animals such as mice and birds. If cultivated, families can obtain a balanced diet that contributes mainly to the health of society.

Today, most cities in Pakistan have a lot of wasteland due to urban sprawl and foreclosures. This land can be used to deal with the insecurity of food. It can be a very water-efficient method using vertical farms in megacities, making it 40% to 70% more water-efficient than conventional farming methods.

Vertical farming can also be energy efficient, as crops can be grown on buildings in city districts, helping to reduce the cost of transportation and preservation of distant farms. If a part of a structure within the central district of the city is specifically dedicated to this cause, vertical farming can help achieve the green building objectives of cities; they also help to circulate the flow of oxygen throughout the building, keeping the building’s occupants in a healthy state.

Pakistan’s first commercial urban vertical farm is situated in Karachi and owned by a resident of Karachi named Sohail Ahmad. The supplied products to few of the best restaurants and supermarkets in the city.

He uses the hydroponics technique, where plants are grown in a nutrient solution instead of traditional soil, and where water is continuously recycled, it contributes to ecological practices using 90 percent less water than field agriculture, without using pesticides and bypassing the emissions of gases involved in long transport routes from rural areas to urban centers, all leading to the freshest greens in the city.

The kitchen gardening project was started by many local organizations in Pakistan because more than 50% of people live in the villages and their small two or three-bedroom house is 0.41 hectares. Local organizations take the initiative to train people in vegetable production technology to use their land to grow fresh vegetables in their surroundings. Many people in the villages take advantage of these courses and start to grow their vegetables, but in the cities, the adoption of this type of project takes time to change the mentality of the people who live in the big cities.

People in big cities of Pakistan just decorate their homes, offices, or gardens with unique flowers or ornamental plants. They have plenty of space to grow better vegetables or fruits for your daily use, but you just bought and met your needs by preferring vegetables and fruits from local markets. The government can take steps to change people’s mentality with the plan of continuous improvement, introducing courses from the school level to the university on the latest technologies, especially urban agriculture, hydroponics, vertical agriculture, vegetable garden. 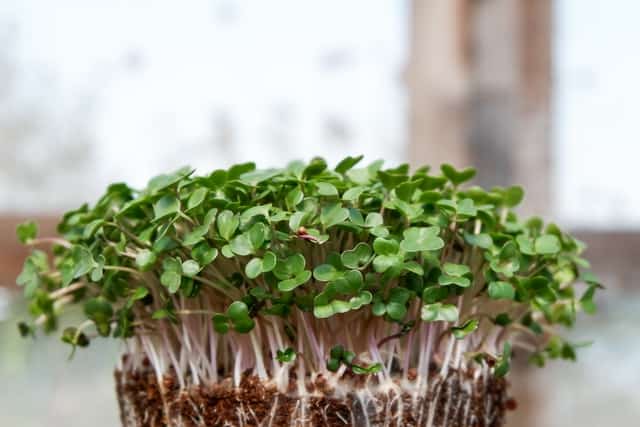 Microgreens are known to be the easiest fresh produce to grow that can be eaten raw. They are the first true leaves produced from a…